A new two-hundred-meter apartment with a view of Nikolina Gora is not the main place of residence of Andrei Malakhov. The TV presenter lived for many years in spacious apartments on Ostozhenka, as well as in the apartment of his wife, publisher Natalia Shuleva. As it was previously known, being adherents of guest marriage, celebrities did not live together.. 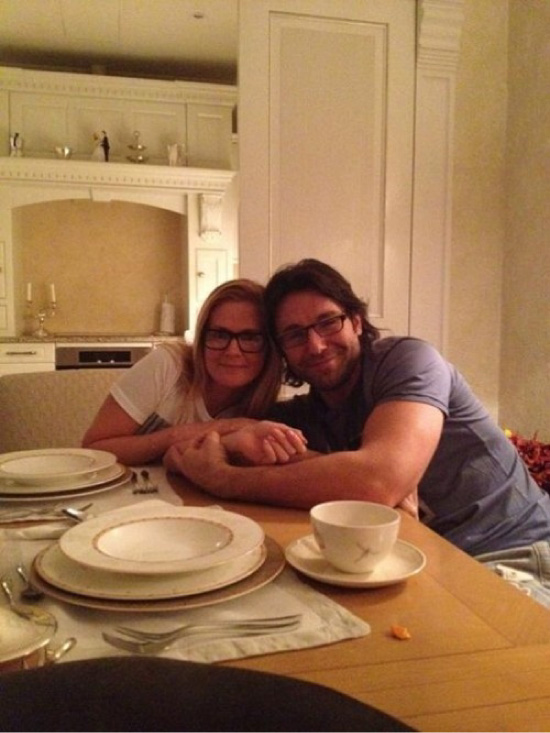 However, in 2017, the firstborn was born to the spouses and, we dare to assume, it is for this reason that in 2018 Andrei Malakhov opened the doors of his new apartment with two tiers. Let’s see what a nest the famous showman made for himself. 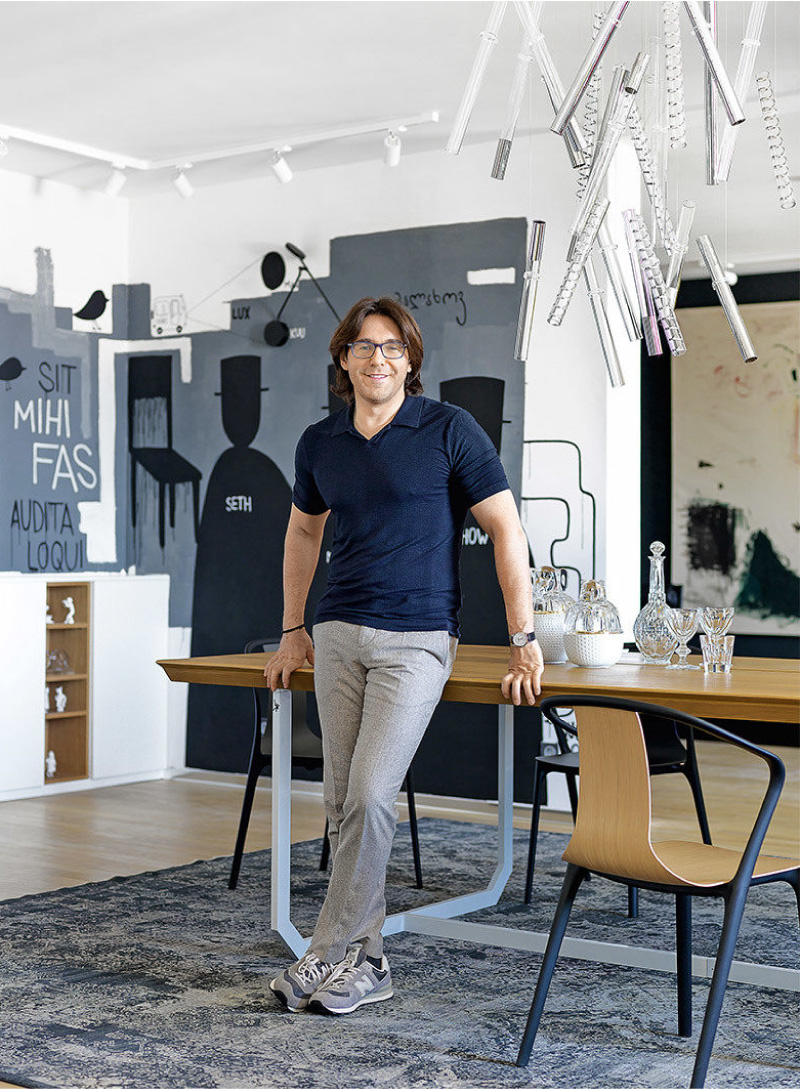 Andrey entrusted the interior decoration to designers Stepan Bugaev and Ekaterina Oleinikova. Interestingly, this cooperation arose unexpectedly for both parties. Stepan Bugaev says that at one time he began to intersect with Malakhov at art auctions and once made a fateful step – he met and offered his services. It turned out that the TV presenter was just looking for a designer and after a while offered Stepan a job on a new object.. 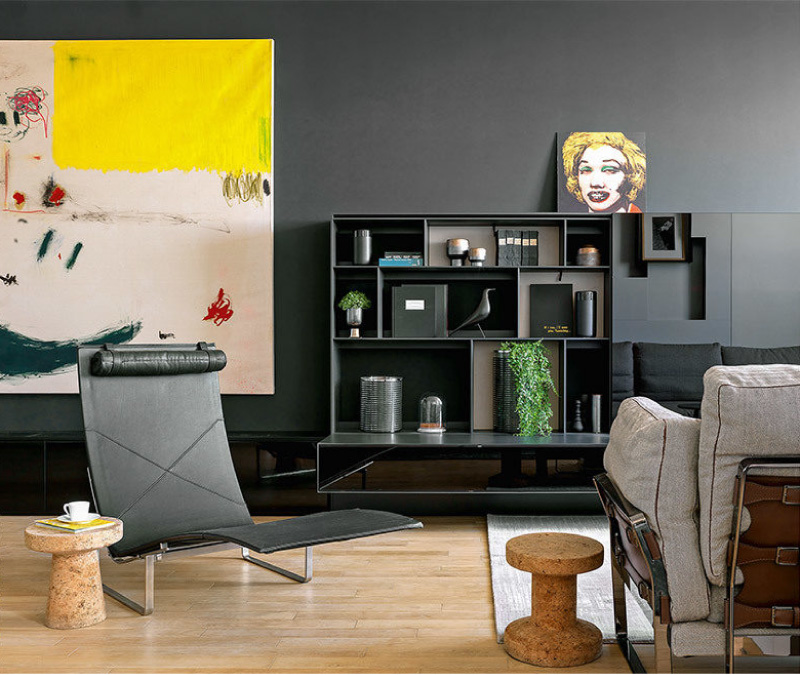 First of all, Andrei Malakhov, a great connoisseur of contemporary art, showed the designers his collection of art objects and set the task of adding the best pieces to the future interior. As a result, it was decided to decorate it in a Scandinavian style with an abundance of gray tones and natural wood. As conceived by the designers, such a neutral background would be the best way to focus attention on the paintings. By the way, in Andrey’s collection you can find works of both young artists and recognized geniuses, for example, Damien Hirst, Andy Warhol, Takashi Murakami, Erwin Wurm and Aidan Salakhova. 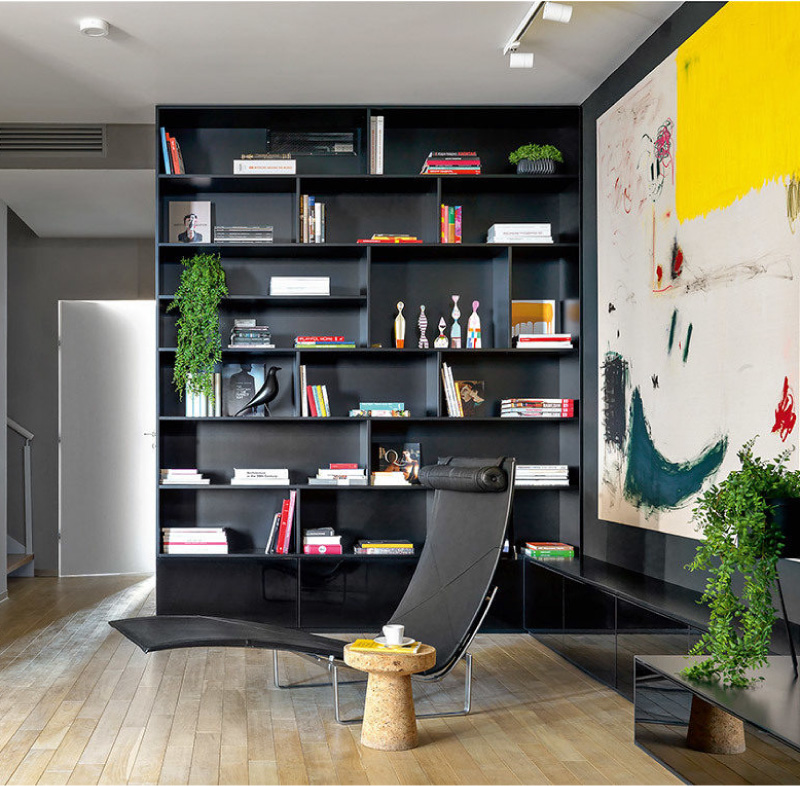 The Scandinavian-style idea turned out to be successful. According to the owner, the furnishings of the apartment remind him of his childhood in the North, on the border with Finland. The TV presenter felt the influence of the neighboring country when, during the Soviet era, he exchanged harvested mushrooms and berries for Finnish-made things.. 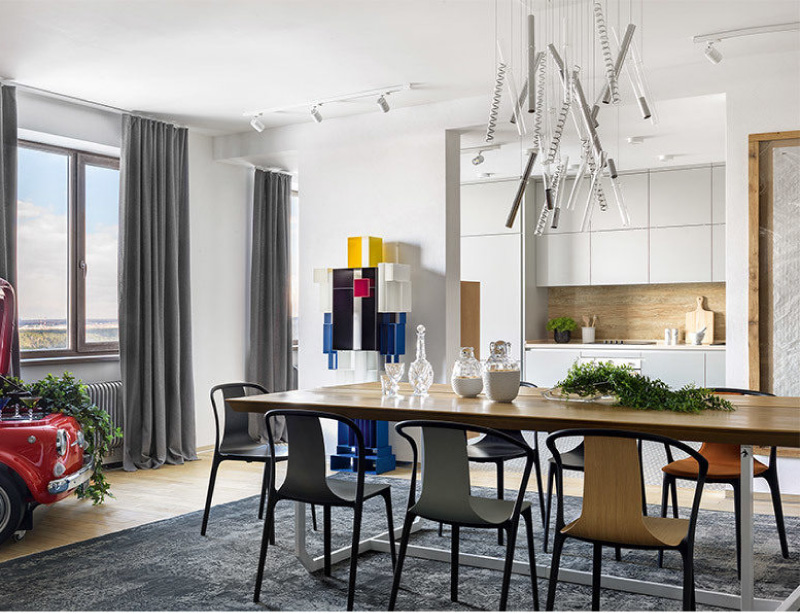 Stepan describes the concept of the resulting interior as “a dacha in a high-rise building”, because the windows of the apartment offer a gorgeous view of the forest. By the way, this factor played a big role in the choice of real estate. The fact is that Andrei did not want to live in a country house and at the same time he dreamed of a place where he could take a break from the bustle of the city alone with himself, with family or friends.. 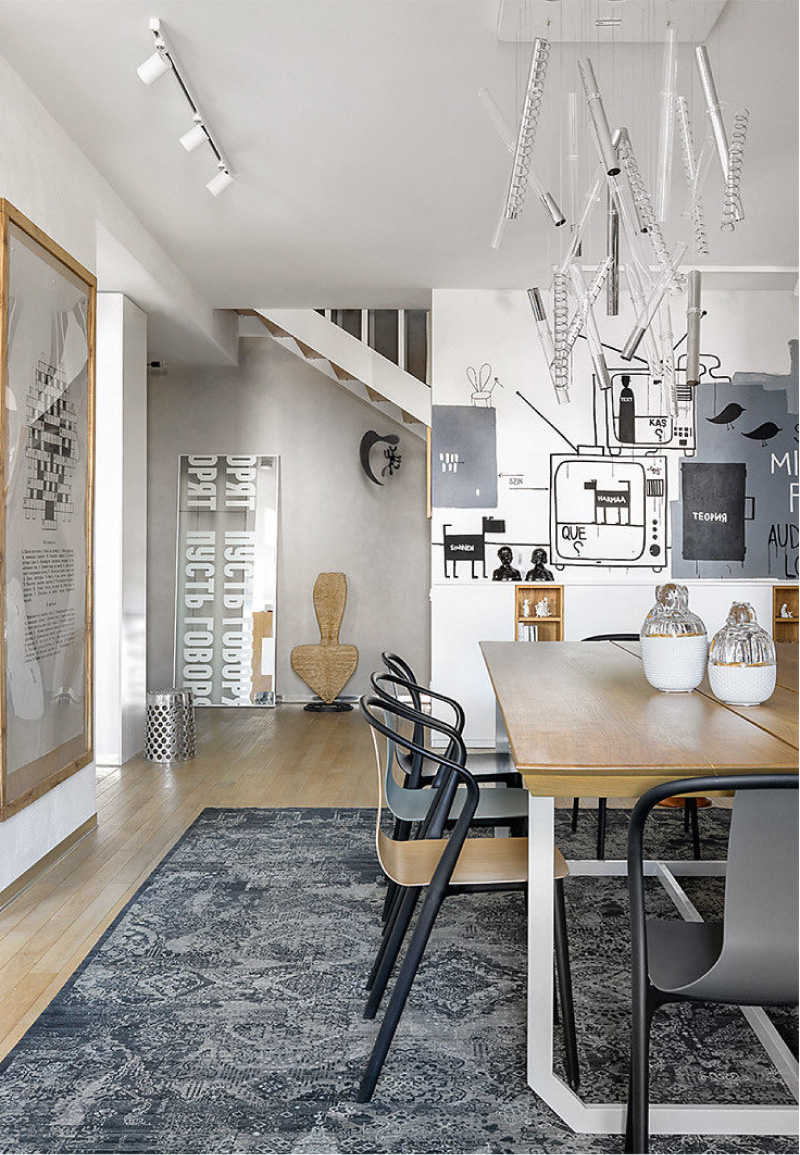 Having decided on the direction of interior design, the designers took up constructive tasks, namely the design of the stairs. The question was, where is the best place to place it in a two-story concrete box. As a result, they chose the far part of the apartment, and not the hallway, in order to unload it and not make it too walk-through. 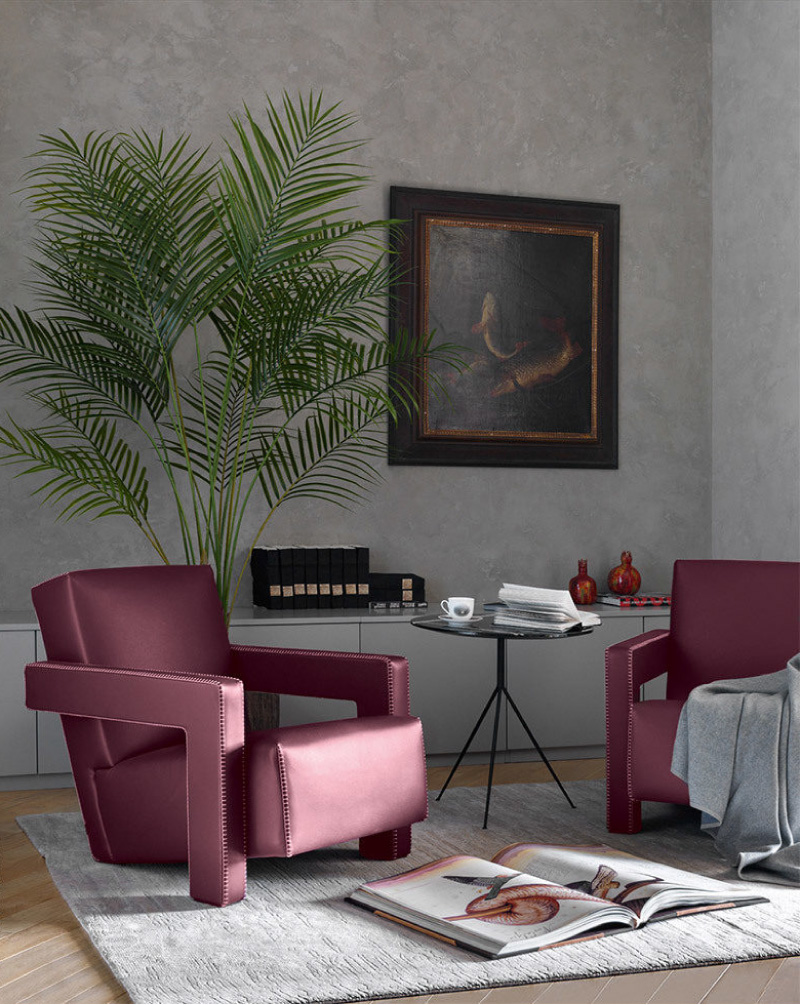 Fragment of the hall on the second floor

Also, in order to achieve the effect of spaciousness and airiness, Stepan and Ekaterina decided not to split the two-hundred-meter space into a large number of rooms. At the same time, the designers fulfilled the main wishes of the owner: a large dressing room, a lot of space for books, paintings and other art objects, as well as ideal conditions for receiving guests and arranging home parties.. 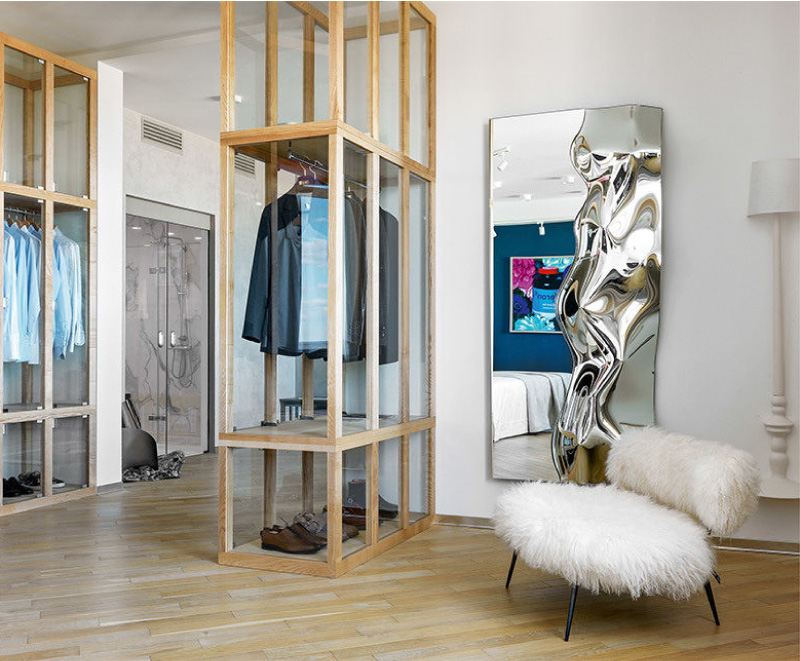 Dressing area in the master bedroom 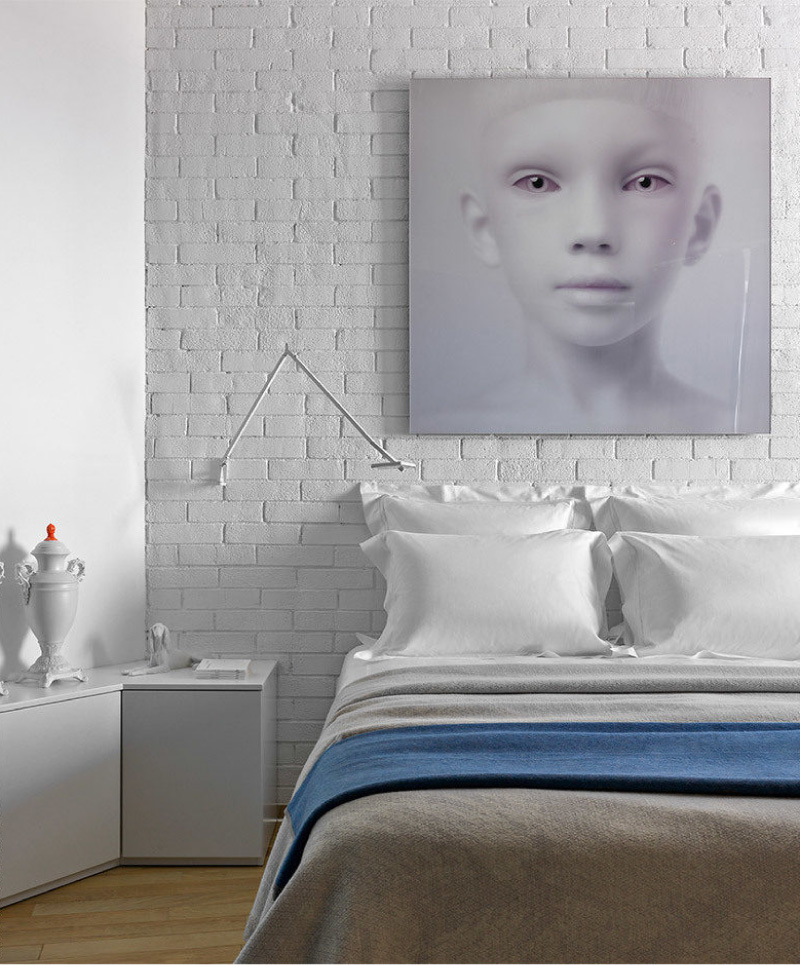 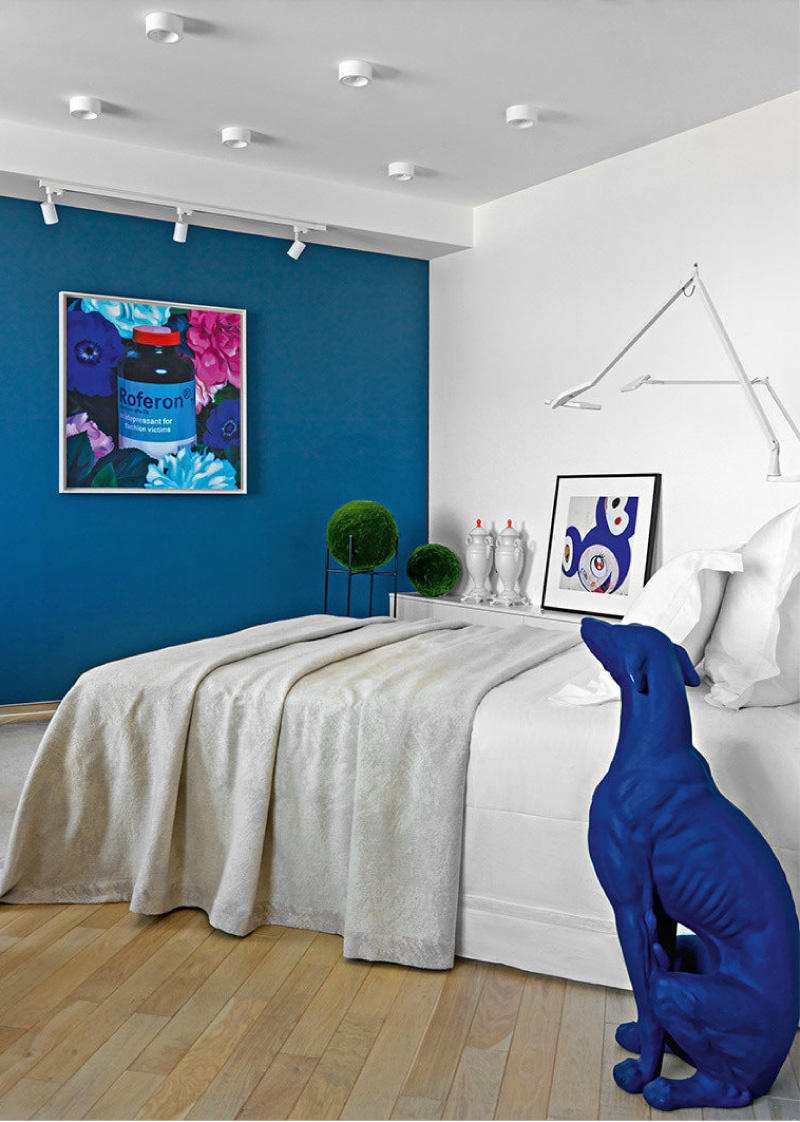 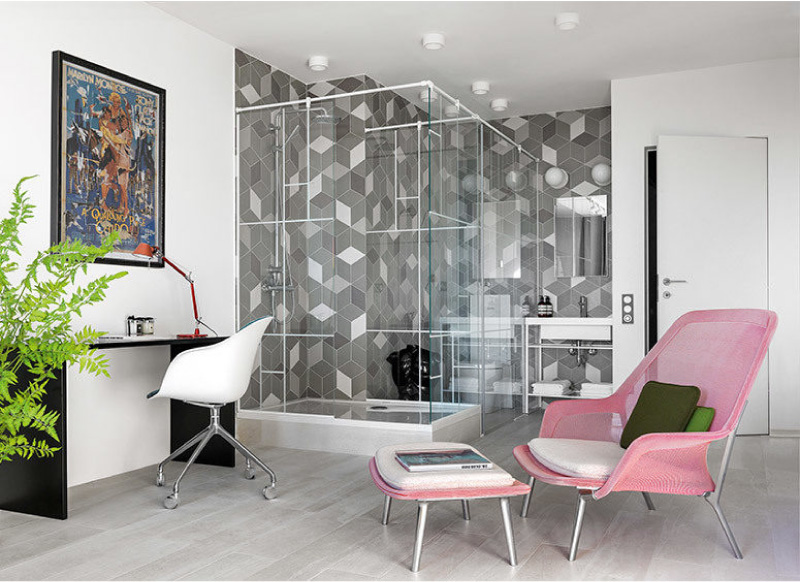 Fragment of the interior of the guest bedroom 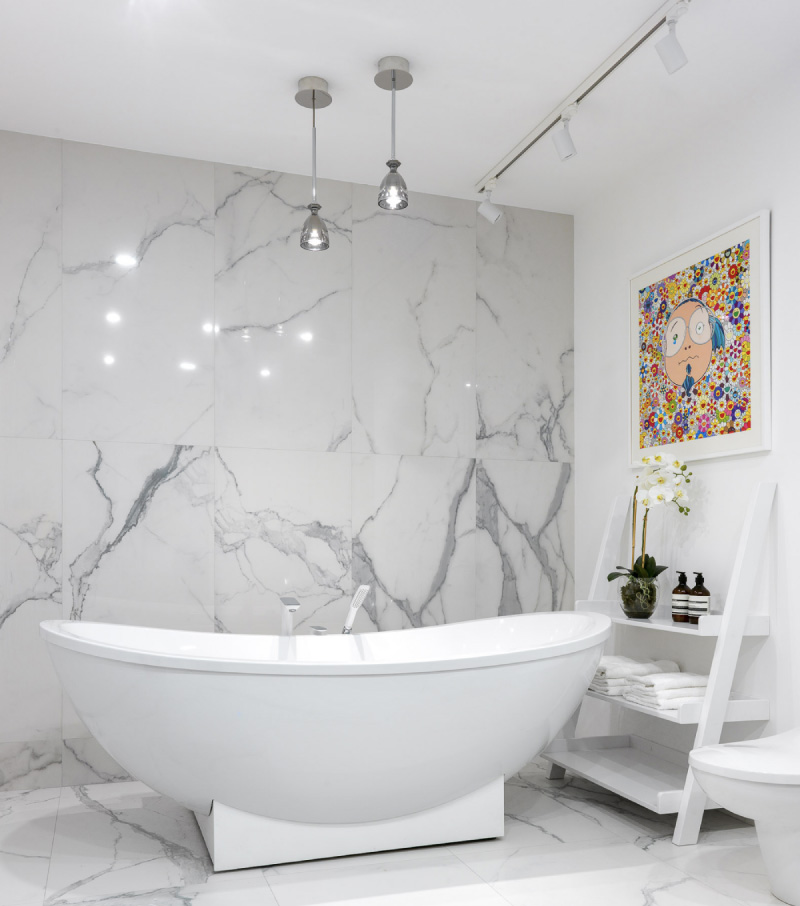 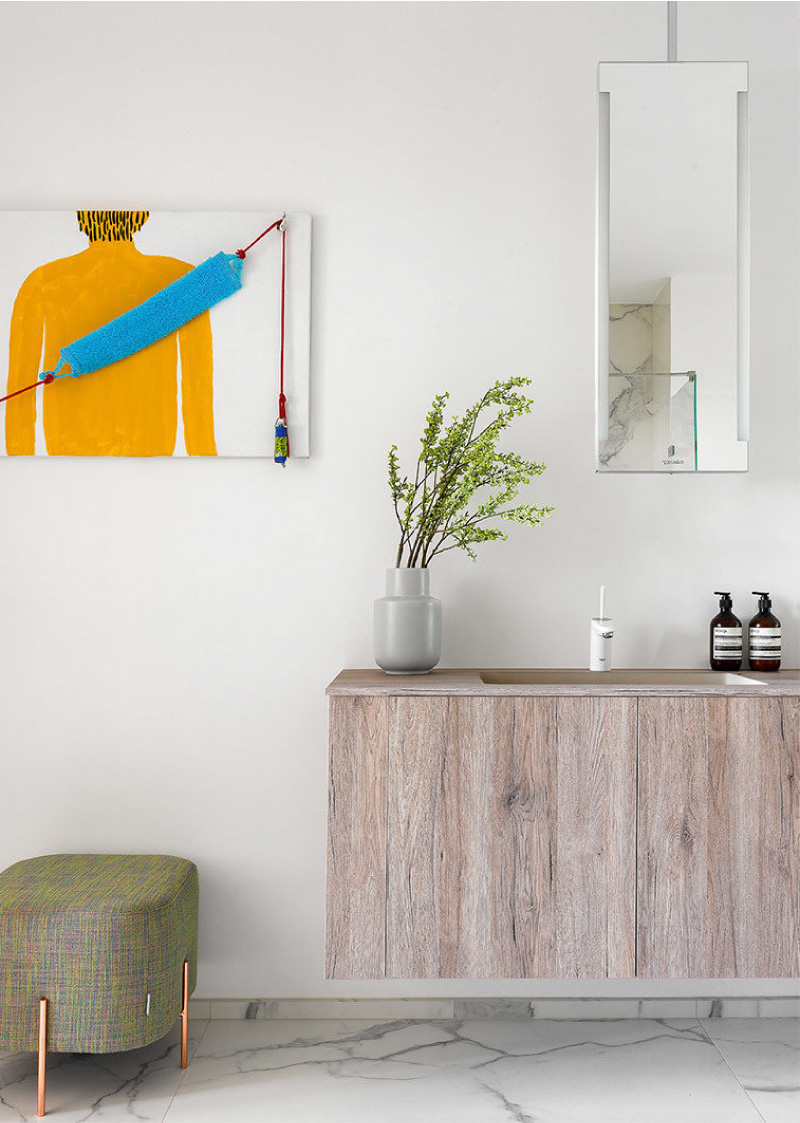 Fragment of a bathroom

The main accent was created in the living room – a corner with a black fresco by Valery Chtak. His own works have thematically decorated the walls in the hall: one wall was decorated with TVs drawn in the spirit of street art, and the other – a concept poster with the words “Let them talk.”. 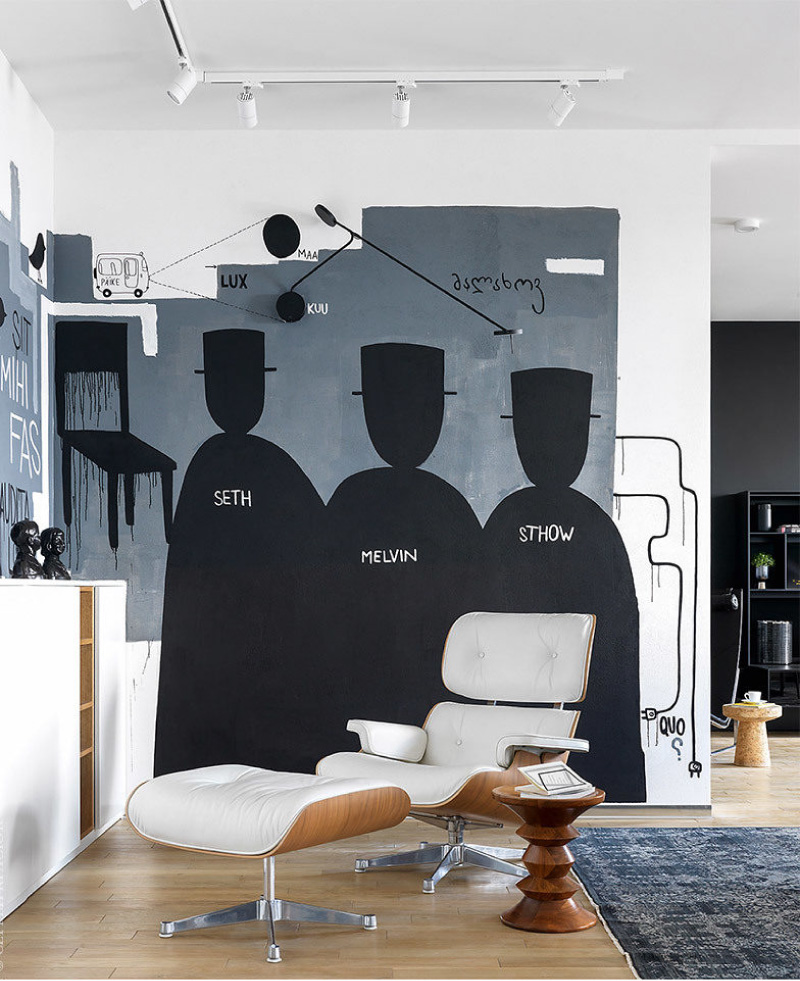 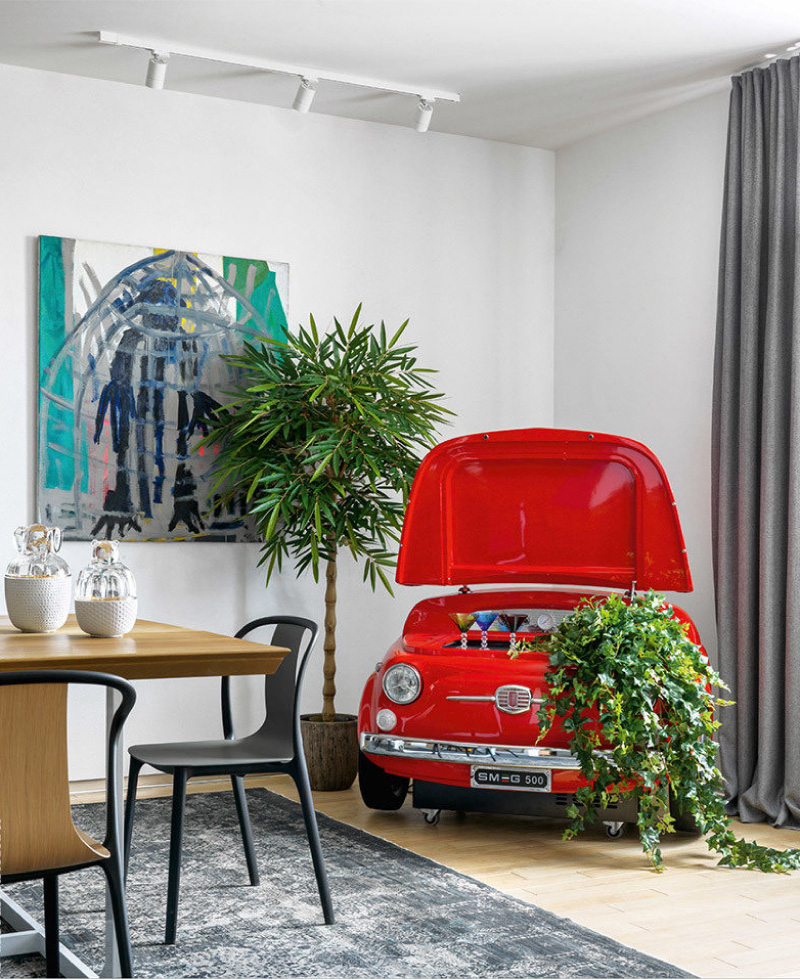 This red car is actually a Smeg refrigerator.

An important place in the interior is also occupied by the work of another artist Anton Olschwang – an image of a crossword puzzle consisting of non-existent words. This funny crossword puzzle also reminds Andrey about childhood, namely about the holidays with his grandmother, when he liked to solve crosswords from the magazine “Crocodile”. 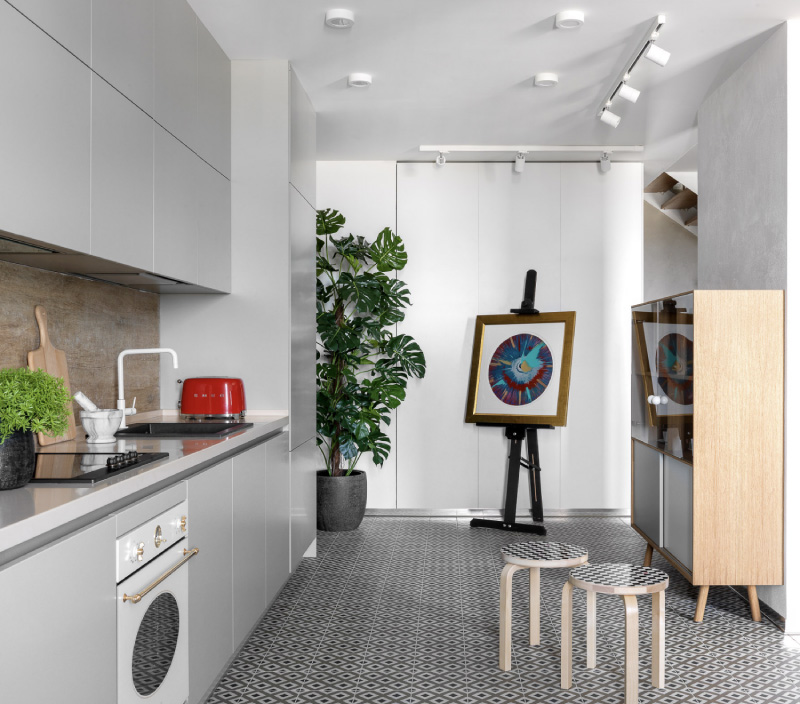 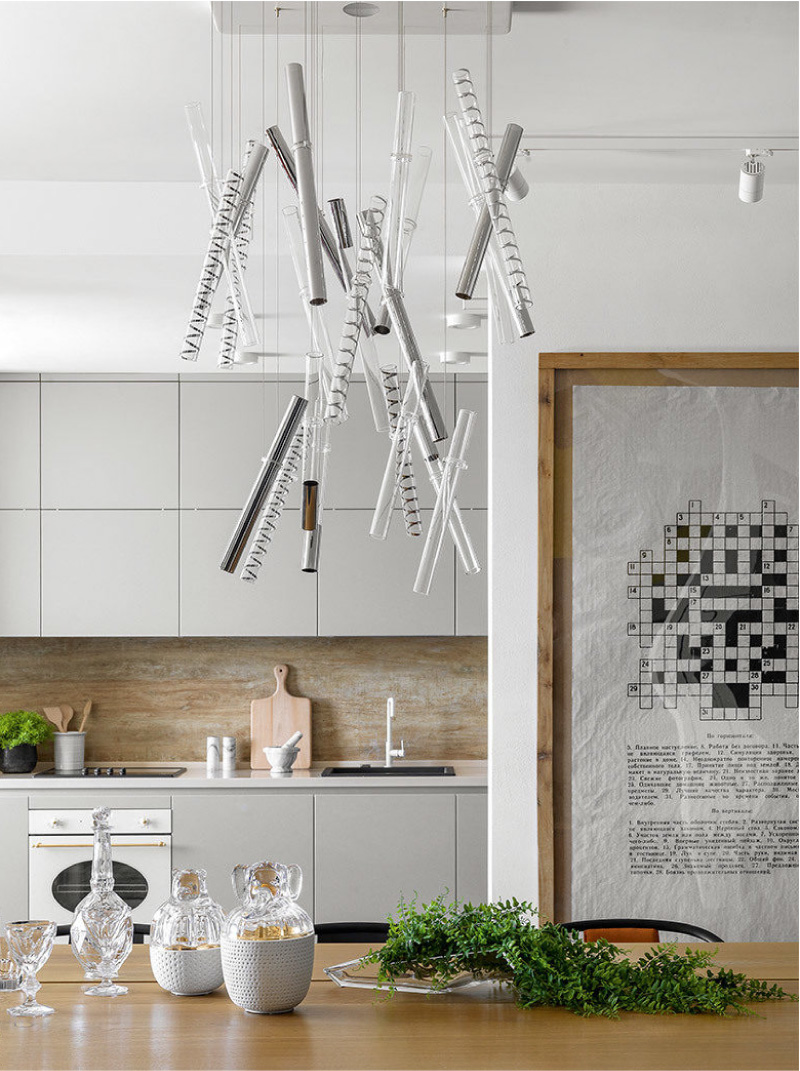 The dining-living room is the owner’s favorite place. Here he meets with friends or relaxes with his wife while watching TV (see video below).

Malakhov especially likes that the resulting interior changes greatly depending on the choice of paintings and over time. Sometimes an apartment can seem austere and restrained, and sometimes – cheerful and bright. According to the TV presenter, he managed to establish “energetic contact” with space, and therefore he feels very comfortable in it.. 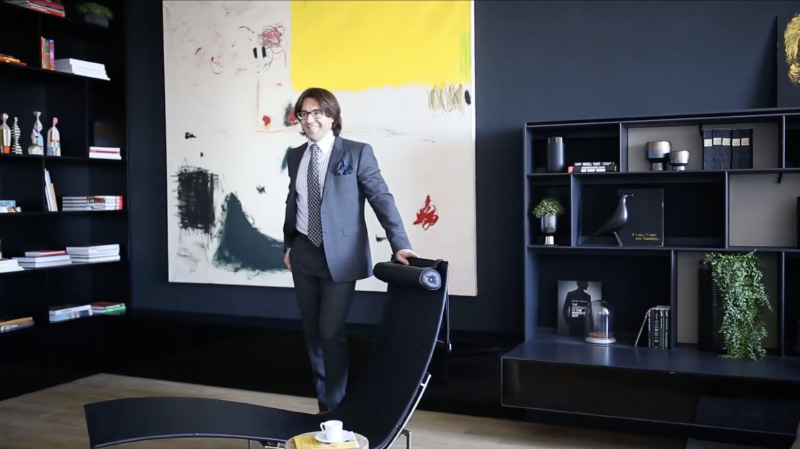 The designers were also pleased with the result: how they managed to create a worthy “haven” for a rich collection of art, and the fact that the interior turned out to be very unusual for the owner, but at the same time suitable for his bright nature. 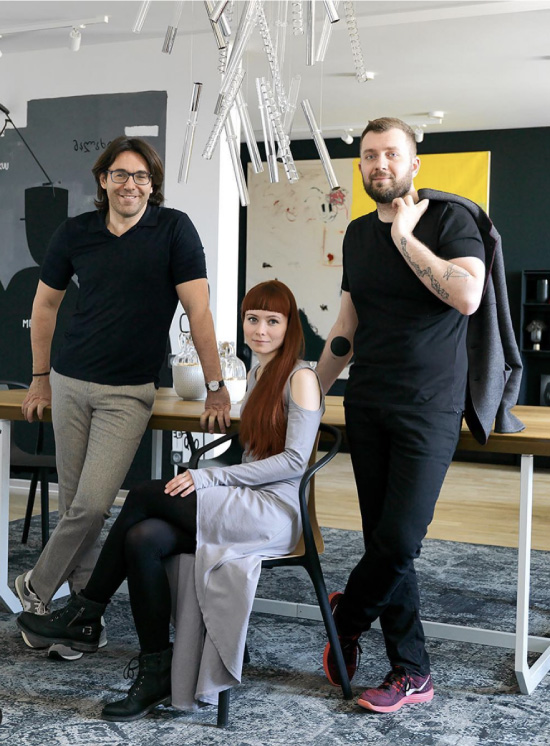